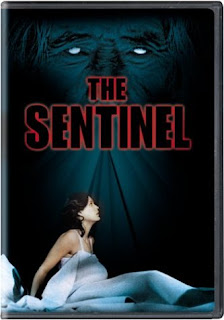 In the four years since we actually added anything to this blog, the world has moved on. DVDs have trembled but not fallen in the face in Blu-Ray and downloads, and our homes have suddenly gained access, via Netflix and other streaming services, to all manner of weird and wonderful movies that might never have otherwise crossed our path.

And thus it came to be that, on a quiet autumn night in 2012, I found myself watching Michael Winner's The Sentinel.

I'm not a massive fan of Micahel Winner as a human being. He's said some pretty obnoxious things over the years and I can't say I'd particularly relish the idea of having dinner with him. That said, some of his films have a certain unique quality that I can't quite bring myself to dismiss out of hand. You see, I have a deep love of Winner's frankly crackers remake of The Wicked Lady which is a terrible, terrible movie that manages to be infinitely more entertaining that 99% of good ones. The day I first watched that movie, I found myself going back to watch it again the very next day.

I didn't revisit The Sentinel the next day, but I'm still glad that I checked it out. It follows Christina Raines' commitment-shy model as she moves into a new apartment but finds herself haunted by spirits of the past. There's a blind priest knocking around upstairs and there may well be a reason that she has found herself in this property.

Yup, it's a 'gates of hell' supernatural shocker which often plunges into camp melodrama but surprisingly often gets things right, too. There are a couple of genuine scares mixed into the stew here: a confrontation with a ghastly old figure in a shadowy room is actually the stuff of genuine terrors rather than pointing and laughing, although elsewhere the pudding is so comprehensively over-egged that it would be difficult to line the movie up alongside its more critically revered peers without someone crying foul.

The final act finally tips over into monumental bad taste and flat-out exploitation, (with a cast of extras with physical disabilities being wheeled (not literally) in front of the camera as examples of the damned), but until that point there's some good creepy stuff here. The cast list is fairly remarkable too, with appearances by Chris Sarandon as our lead's would-be husband, a young-looking Jeff Goldblum and even Eli Wallach and Burgess Meredith turning in some interesting work.

Now, if you'll excuse me, I'm off to watch The Wicked Lady remake again. It's a far, far worse film, but it's much, much better.