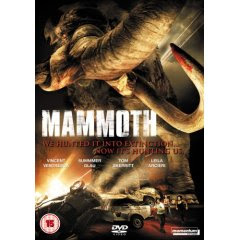 Mammoth is one of those flicks that a dedicated fan of b-movies needs to have watched just to be able to describe the plot at parties. The quality or entertainment value are a total irrelevance; you just know that you have to be able to be able to walk up to people you've never met before and say;
"Have you, by any chance, ever seen that film involving the alien-possessed zombie mammoth that sucks people's souls out through their faces with his trunk? It's got the chick out of Firefly in it"
Mammoth is, of course, a great big cheerful bucket of horseshit. Funded by the Sci-Fi channel, it stars not only the aforementioned Summer Glau but also Tom Skerrit, who has been smacked around the face with the aging stick so many times that he's almost unrecognisable as being the same guy who humped Drew Barrymore in Poison Ivy, let alone being Captain Dallas.
The plot, you say? Why? Of what possible interest could the plot be when you already know this features an alien-possessed zombie mammoth that sucks people's souls out through their faces with his trunk? Short version; alien meteor wakes up mammoth. Long version; actually, the short version pretty much covered it.
The mammoth himself is, of course, CGI. Much as I'd have loved him to be stop motion, or possibly a guy on all fours in a mammoth costume, we're strictly in low-budget zeroes and ones territory with all the inevitable sense of green-screen disconnect that brings with it. There's some weird shit going on with the looping here, too, and I can't help wondering if the last act was a rewrite since we barely get to see a single mouth move in synch with the words it is uttering for the last ten minutes.
Frankly, Summer Glau really should be starring in a better standard of cack than this if she wants to keep her career out of post-signature-role freefall, but that's not to say that the flick isn't reasonably diverting and happily aware of its own ridiculousness. Having said that, a quick glance around on the net seems to reveal an awful lot of amazon/imdb armchair reviewers thoroughly outraged that the flick doesn't take itself seriously.
"For those who like serious sci-fi like me, you will feel cheated" opines one Amazon user. Quite whether the world is ready for a deadly serious zombie soul-sucking mammoth movie will have to remain a mystery.
For now, at least...
Posted by Krite at 02:06